These instructions are for Users to obtain and run EdgeX Foundry. (Developers should read: Getting Started - Developers)

To obtain and run EdgeX Foundry, perform the following steps: 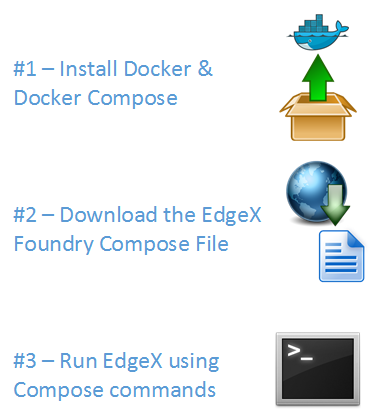 EdgeX Foundry is an operating system (OS)-agnostic and hardware (HW)-agnostic IoT edge platform. While minimum platform requirements are yet being established, at this time the following options are recommended:

To run Dockerized EdgeX Foundry, you need to install Docker. See https://docs.docker.com/install/ to learn how to obtain and install Docker. If you are new to using Docker, the same web site provides you additional information. The following short video has is also very informative https://www.youtube.com/watch?time_continue=3&v=VhabrYF1nms

Docker Compose is used to orchestrate the fetch (or pull), installation, and the start and stop of the EdgeX Foundry microservice containers. See: https://docs.docker.com/compose/ to learn more about Docker Compose.

Docker Compose is automatically installed with Docker for Mac and Windows users. See: https://docs.docker.com/compose/install/ to determine if your Docker installation already contains Docker Compose, and how to install Compose if it does not.

If you know Docker and understand the architecture of EdgeX Foundry and its microservices, you can manually issue Docker commands to download and run each of the EdgeX Foundry containers yourself. Situations exist, particularly in development situations, when you want to have this manual control even though manually issuing commands can be a bit tedious. More instructions are provided in this documentation set if you need to have more control of downloading and running EdgeX Foundry microservices.

The collection of the EdgeX Foundry Docker compose files are found here: https://github.com/edgexfoundry/developer-scripts/tree/master/releases

Note that most of the Docker Compose files carry a specific version identifier (like california-0.6.0) in the file name. These Compose files help obtain the specific version of EdgeX. The docker-compose.yml file will pull the latest tagged EdgeX microservices from Docker Hub. The docker-compose-nexus.yml will pull the latest microservice images from the developer’s Nexus registry which contains the latest built artifacts. These are typically work-in-progress microservice artifacts and should not be used by most end users. It is recommended that you use the lastest version of EdgeX Foundry. As of this writing, the latest version is: Delhi (version 0.7.1)

A Docker Compose file is a manifest file, which lists:

Now that you have the EdgeX Foundry Docker Compose file, you are ready to run EdgeX Foundry. Follow these steps to get the container images and start EdgeX Foundry!

Now run the following command in the terminal to pull (but don’t start) all the EdgeX Docker images down to your system:

After the Docker images are pulled, start EdgeX with this command in the terminal:

In some situations, you may want to bring up the containers one at a time using Docker Compose. If you are a developer or if you don’t want to bring up all of EdgeX (perhaps because you are just working with a few of the services), you can issue Docker Compose commands to pull and start each EdgeX container separately. Because some containers are dependent on others, you should try to start them in a specific order. The table below provides you the commands to start each of the EdgeX microservices in the order they should be started (based on their dependencies with one another). Essentially, the single Docker Compose up command (docker-compose up -d) uses the manifest to run all of the individual up command listed here in order.

Run a “docker-compose ps” command to confirm that all the containers have been downloaded and started. (Note: initialization or seed containers, like config-seed, will have exited as there job is just to initialize the associated service and then exit.) 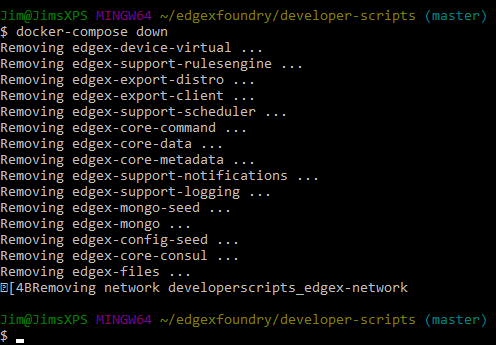 After this operation, calling docker-compose ps shows no running or available containers.

After you have mastered obtaining and running EdgeX Foundry, you may want to take more control of EdgeX Foundry microservices. These commands provide you the ability to do that. Pull Images 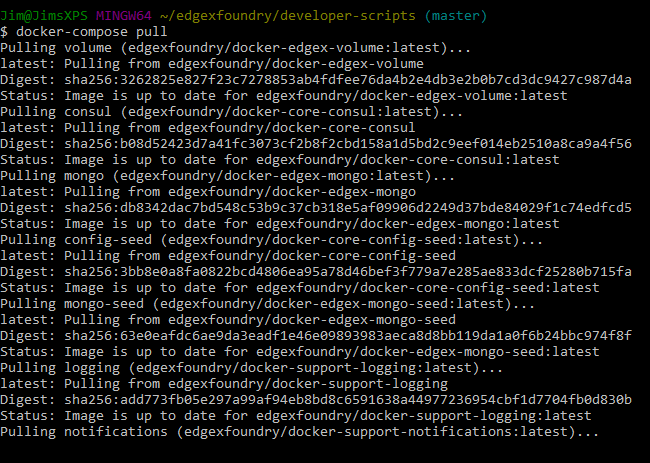 To get a list of the Docker Compose names of the containers (as they are in the docker-compose.yml file), run “docker-compose config –services” as shown below. 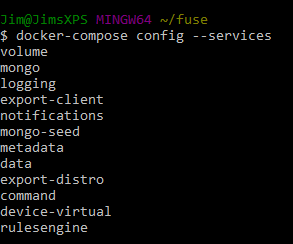 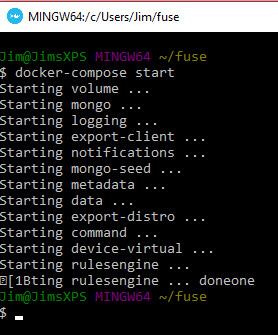 or “docker-compose start [compose-container-name]” to start an individual container (after that container has been stopped). Here, the volume container is started. 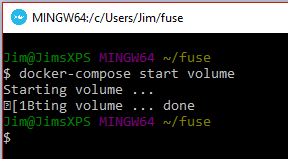 If you have stopped a specific container and updated its image (with docker-compose pull above), this command allows you to recreate/start the image without affect to other containers.

To stop (but not remove) all containers, issue docker-compose stop. 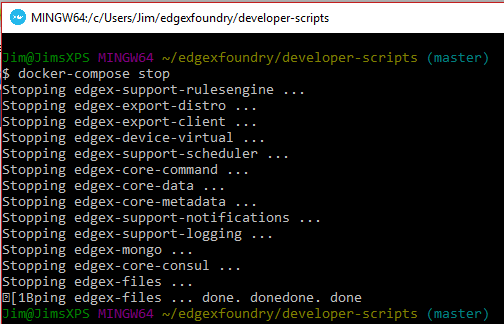 4.1.6. Checking the Status of EdgeX Foundry¶

As shown above, from the terminal, use docker-compose ps to get a list of the containers that exist and are running. In additiona, the standard docker command (docker ps -a) can also provide the list of running containers.

The standard docker command (docker ps -a) command also indicates when the container was started, how long it has been running, and many other details. You can use a –format option to retain only the pertinent information in your list. See here for more details on formatting the list of containers.

To view the log of any container, use the command “docker-compose logs -f [compose-container-name]”. The example below shows the log for the data container.

When you are done reviewing the content of the log, select Control-c to stop the output to your terminal.

Below is a list of the EdgeX Foundry microservices, their ports, and “ping” URLs.

The “host” address for the URLs above is determined by the Docker Engine. The default Docker Engine IP address varies by operating system (this can be configured on your system-see the Docker documentation for details).

EdgeX Foundry uses the open source Consul project as its registry service. All EdgeX Foundry microservices are expected to register with the Consul registry as they come up. Going to Consul’s dashboard UI enables you to see which services are up. Find the Consul UI at http://[host]:8500/ui. 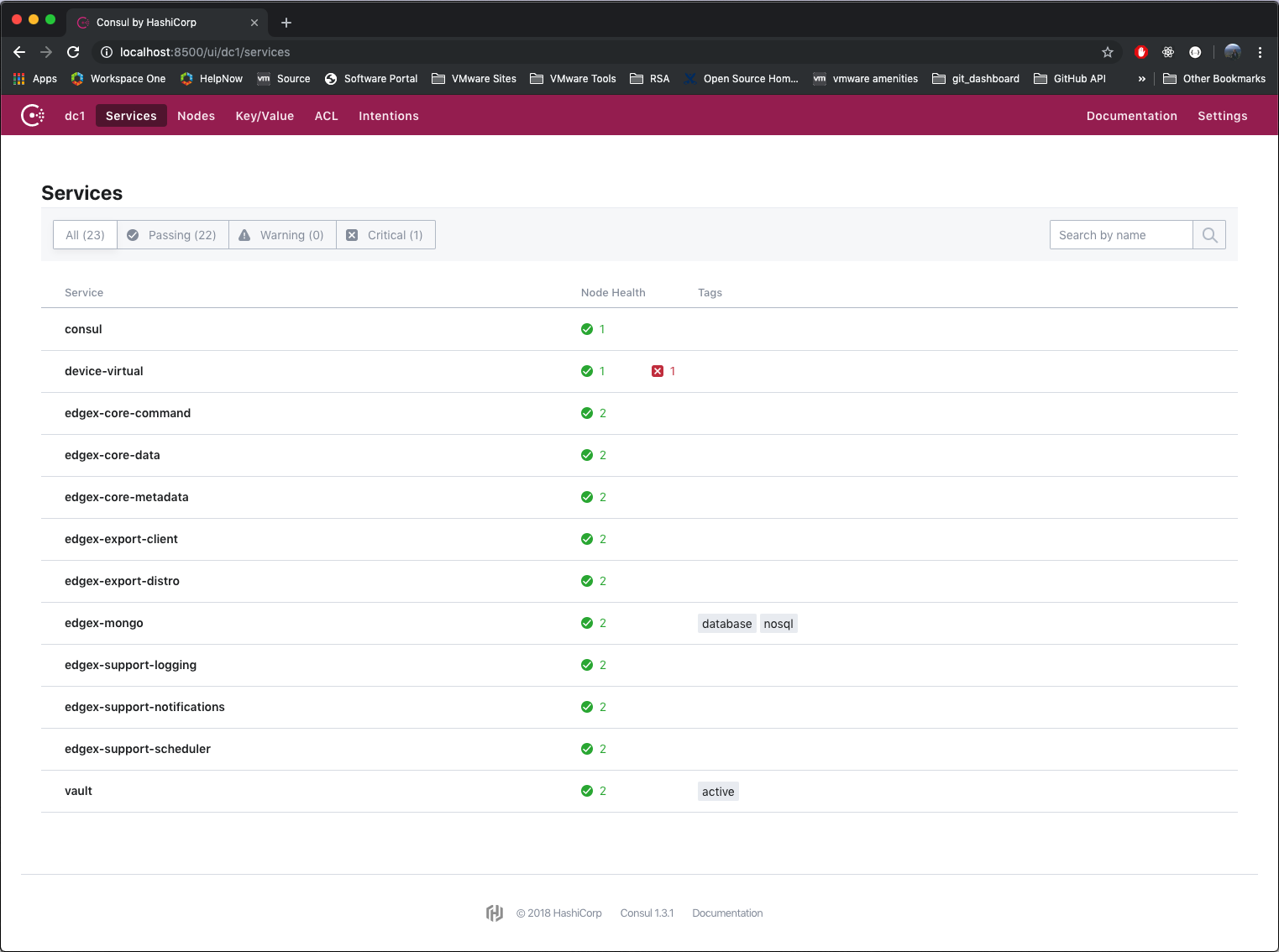